A simple blood test could be developed to predict Alzheimer’s disease up to a decade before symptoms appear, scientists claim.

A breakthrough by British researchers has identified a single blood protein which acts as a warning flag for mild cognitive impairment - a disorder that is often the precursor to dementia.

In the largest study of its kind, the researchers measured more than 1,100 proteins in the blood of 106 pairs of twins.
Tracking the 212 healthy adults over ten years, they found that those whose thinking skills diminished the most had lower levels of an individual protein. 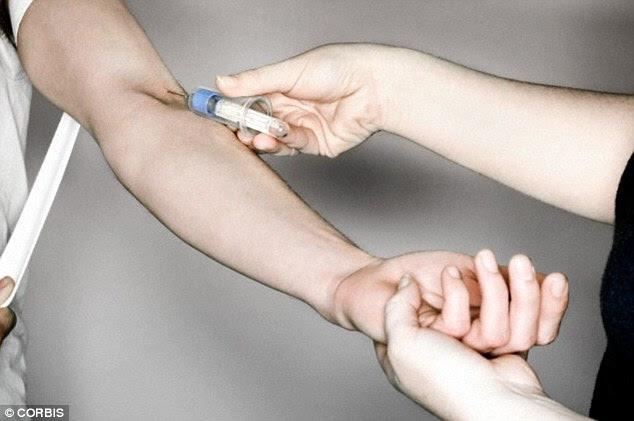 A breakthrough by British scientists has identified a single blood protein, which acts as a warning sign for mild cognitive impairment - a condition that is often a precursor to dementia. It raises hopes for a new blood test to predict risk up to 10 years before symptoms set in

The research is still at an early stage, but scientists hope that it might be developed into a test which flags up those who are at risk of developing dementia.

There are currently no treatments available proven to prevent Alzheimer’s disease - but doctors hope that identifying those most at risk could speed the search for new drugs that could delay or even prevent the devastating brain disease.
Flagging those at risk would give patients and their families more time to prepare, they hope..

The protein - called MAPKAPK5 - was, on average, lower in individuals whose cognitive ability declined over a ten-year period.
But by using identical twins - who share 100 per cent of their genes - the scientists showed that the association between the protein and cognition was independent of age and genetics.
We’re very optimistic that our research has the potential to benefit the lives of those who don’t currently have symptoms of Alzheimer’s, but are at risk of developing the disease
Dr Claire Steves, King’s College London
Experts have been trying for years to create a blood test for Alzheimer’s - often referred to as the ‘Holy Grail’ of dementia research.

Currently patients are only diagnosed with the disease when they start to lose their memory - and thousands are thought to be living without a diagnosis.
Brain scans have been shown to display visible signs of the disease before the onset of symptoms - but they are expensive.

Study author Dr Steven Kiddle, of King’s College London, said: ‘Although we are still searching for an effective treatment for Alzheimer’s disease, what we do know is that prevention of the disease is likely to be more effective than trying to reverse it.

‘The next step will be to replicate our finding in an independent study, and to confirm whether or not it is specific for Alzheimer’s disease, as this could lead to the development of a reliable blood test which would help clinicians identify suitable people for prevention trials.’

Dr Claire Steves, senior lecturer in twin research at King’s College London, added: ‘We’re very optimistic that our research has the potential to benefit the lives of those who don’t currently have symptoms of Alzheimer’s, but are at risk of developing the disease.’

Charities last night welcomed the findings, which were funded by the Medical Research Council and published in the journal Translational Psychiatry.

Dr Eric Karran, of Alzheimer’s Research UK, said: ‘Searching for reliable markers of disease in the blood is a tricky task, as protein levels can be influenced by so many factors that differ between individuals.
‘Twin studies present a unique insight into the biology of complex diseases like Alzheimer’s, as they control for age and most genetic effects.

‘This study associated blood levels of protein called MAPKAPK5 with cognitive decline over a ten year period, but it will be necessary to investigate more about a possible mechanism linking this protein to changes in memory and thinking.
‘Accurate and early diagnosis of Alzheimer’s will be essential for the development of new treatments, allowing clinical trials to take place involving the right people at the right time, when those treatments are most likely to be effective.’