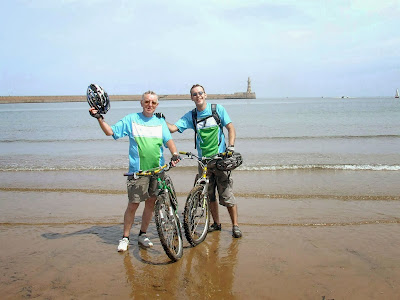 The photograph at the bottom was taken around 2007 when I did the Coast 2 Coast with my son.
What would you like to do, while you still have the chance
This was a question I was asked around 2005, after my diagnosis, when I was unsure about what life had in store for me.
So this copy of the blog was written then although I am unsure of the correct date.
A few weeks ago someone who was a doctor, asked if there was anything I would like to do, if I had the chance to do it, while I am able and get the chance.
She was a bit shocked at my answer, but as I said to her, what have I got to loose, I have had a good life, and although I did not ask for this illness, I would really like to do something positive for a charity, as some of these people have helped me so much since being diagnosed with Lewy Body Dementia.
Apart from seeing parts of the world which look fascinating, like Singapore where we went with the Alzheimer's Society to the Alzheimer's Disease International Conference, but then I am unsure as to where I would go because long journey's cause a lot of stress.
There are parts of the world which fascinate me and would love to go but would never be able to afford the costs.
However I would love to do something stupid like a parachute jump, or wing walk for charity, providing of course that someone paid for it,, and also paid a large sum of money to my chosen charity.
Am I stupid, I don't know, certainly my wife thinks I am, but I would never have even considered this years ago before my diagnosis, so perhaps I must have lost my fear of things like this, or I just want to do something like this before the illness gets any worse.
I could never do a bungee jump, as I would be terrified of the rope snapping, but why am I not frightened of the other two, I really don't know.
I suppose with these two you are strapped on to something, which is a form of security.
In 2007 my son decided to do the Coast to Coast cycle ride,but as things turned out he could not get anyone to join him, and one day suggested that I should join him, but I don't think either he or my dear wife expected me to take him up and do it. I still don't know what made me agree to do it.
It took over six months of training to get fit enough, and get used to the bicycle, which in the end was part of me, and I got so relaxed I would do parts of the journey on my own, as it was away from traffic.
When we started it was difficult to stay up right and stable on the tracks, and I had problems at times with sharp corners, as I could not always judge them.
However after a while I felt as if I had never been away from a bicycle.
I used too cycle to work each day before I became unstable and stopped, and confess that I never ever expected to get back to it.
Yet once I got past the first month I got less and less stiff, in myself, and enjoyed it. After the big event I felt as it I had wrecked my right knee and hip, and had problems for quite a while, and still do on cold days or after a bad night.
Although it was hard work, and brain draining at times, I really enjoyed it, as it was an experience that I never thought I would ever try let alone complete.
The second day was hell as I kept forgetting which gears were which, and felt like throwing the bike into a stream on two occasions.
However the fundraising side of this took its tole on my family, and we all agreed we could never do it again, as it was all down to family and friends, although we did raise around £3,000 for our local branch of the Alzheimer's Society. This was before I had heard about the Lewy Body Society, otherwise we would have raised the money for them
But I don't think I could get insurance for this anyway, as travel insurance is well out of my league, so much so that last year we went to Malta and my insurance cost just as much as the holiday, all because of this illness Lewy Body Dementia.
So perhaps I will have to just think about this and imagine what it would be like to do it.
If I ever do anything in the future God willing, it will be for the Lewy Body Society, because they have done so much to help me, so this will help to pay them back for all of the support and help they gave us.
This illness makes you think of all sorts of stupid things at times, but I guess its because we feel as if time is running out, so perhaps I should just take it easy and behave myself.