- June 06, 2018
Like many other  people, I am doing my best to raise awareness of Lewy Body Demenntia , which is a terrible illness, and we are encouraging everyone to wear something to represent this
I am seen here wearing my Lewy Body Dementia tie, something I am proud to wear when ever I am out at an event.
I am very proud to represent the Lewy Body Society and usually wear my Lewy Body Tie, as a mark of respect when ever I can, although tying it can be stressful these days

Many people have never heard of this illness, and as it's difficult to describe properly I have used some information from other websites to describe it properly.
Lewy Body Dementia is not an easy illness to diagnosis, and like other illnesses like Parkinson's disease etc, it can only be really confirmed after death.
So Doctors have to diagnose Lewy Body Dementia, based on the range if symptoms a person shows, and thus usually requires an ongoing decline in the following,
Thinking skills
Planning
Along with two of the following:
Visual hallucinations,
Parkinsonism or
Fluctuating alertness.
Some people may experience a condition known as REM sleep behavior disorder, in which people act out their dreams while they sleep.
This can be difficult for both the patient and anyone sleeping near by, and it's possible for someone to get hurt in the process, as my wife once found out when she tried to bring me out of this dream but got hurt in the process
If a person acts out dreams, that is strong evidence that he or she has synuclein protein in the brain.
This protein is found only in Lewy body dementia, Parkinson's disease and a rare disease called multiple system atrophy. Acting out one's dreams is a feature in all of these diseases.
They also may have instability in their blood pressure and heart rate, and the body may have difficulty controlling body temperature and sweating.
Because Lewy body dementia diagnosis and treatment needs to be managed properly to get the most effective results, people who have this disease should be monitored by a physician with expertise and experience with Lewy body dementia — usually a neurologist
A brain disease that gets worse over time, Lewy body dementia is caused by an abnormal protein, called synuclein, which is deposited in certain nerve cells and nerve processes.
These deposits are called Lewy bodies — named after the physician who first identified them. In Lewy body dementia, Lewy bodies are found in the deep structures of the brain that control movement, as well as in the middle and outer structures involved in emotion, behavior, judgment and awareness.
Many patients with Lewy body dementia also have overlapping Alzheimer's disease. About half of Lewy body dementia patients have significant Alzheimer's disease, as well.
This, it is not surprising that those diagnosed with Lewy body dementia have symptoms associated with Alzheimer disease, such as memory loss and naming difficulty.
However, when doctors who have expertise and experience with the disease make a Lewy body dementia diagnosis, that diagnosis is often correct — as confirmed later during an autopsy.
An accurate diagnosis is important, because Lewy body dementia responds differently than Alzheimer's disease to commonly prescribed dementia medications.
Lewy body dementia usually progresses gradually over several years, but the way it progresses can vary significantly from person to person.
For example, Lewy body dementia may begin with signs of dementia, and Parkinsonism appears later. Or the disease may start with movement difficulties, and signs of dementia don't emerge for some time.
Most people with Lewy body dementia experience the onset of Parkinsonism and dementia within one year. As Lewy body dementia progresses, all symptoms usually become more severe.
Hallucinations occur early in Lewy body dementia but only after about four years in Alzheimer's disease.
Lewy body dementia is a complex disease, and it can be difficult to control. Currently, there's no cure. But, when treatment is carefully managed, symptoms may be reduced, so they have less effect on a person's daily functioning and quality of life.
Some people diagnosed with Lewy body dementia respond positively to medications called cholinesterase inhibitors.
They boost the level of a chemical messenger in the brain called acetylcholine that's important for memory and other cognitive functions. These drugs may help improve alertness and reduce hallucinations and signs of dementia.
Other medications are available to help decrease the Parkinsonism, hallucinations and other Lewy body dementia symptoms.
These medications must be closely monitored by a health care provider. In people who have Lewy body dementia, medications to improve motor function may make symptoms such as hallucinations worse, and medications used to combat dementia may increase Parkinsonism.
Please accept my apologies because my tablet is playing up, so some of the writing is a different size to the original
If you considering a charity fundraising event in the future, or considering doing something positive as a New Years Resolution, if so why not consider supporting the Lewy Body Society.
Charity events run through out the year, and range from small family events, to large local or national events, so please think of this wonderful charity if you want to do a charity run etc.
As an Ambassador with the Lewy Body Society, I would like to encourage people to support us in any way they can
This is a small charity which is totally dedicated to those living with, or caring for someone with Lewy Body Dementia in the United Kingdom
We need all of the support we can get, so we can promote the charity, in the hope that we can get a higher profile for Lewy Body Dementia, and also for those living with this form of Dementia and their carers, within the UK.
So if you are considering doing a sponsored event for a wonderful caring charity, please come and support this wonderful charity, which does so much to help those with this form of Dementia, within the UK
If you are unsure what the illness is, or need to know more about it, why not look at our new video about Lewy Body Dementia, which is on our website. This was filmed this year and it's now doing it's rounds on Social Media under Lewy Body Society. Org. UK
The more people Who Know, The Fewer People Who Suffer
The Lewy Body Society
Hudson House
8 Albany Street
Edinburgh
EH1 3QB
Telephone 0131 473 2385
Email : info@lewybody.org
Press enquiries lewybodypress@gmail.com 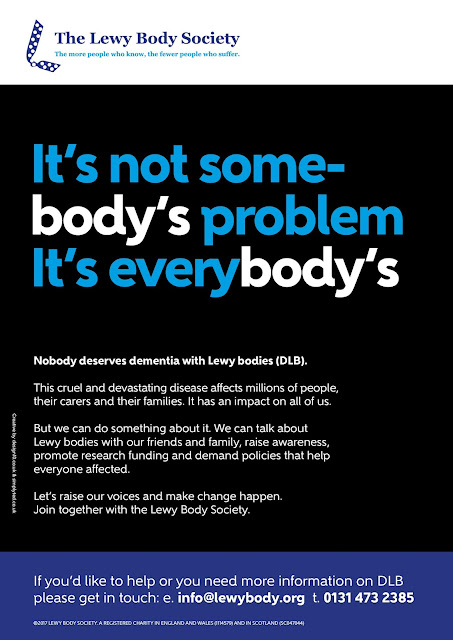