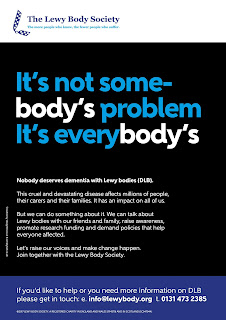 After three one hour talks during the last week to graduate nurses at Northumbria University, I confess that I felt very tired by Friday afternoon

I cannot thank my wife enough for her help and support in the writing of these talks, as well as her help during them when I get stuck.

She also makes sure that I get there, and arrive in the right place at the right time.

But at the same time I feel honoured to have been involved in this project, as it gives me time to explain life with a form of lewy Body Dementia.

Many of these people have never heard of this  type of Dementia before, so it's been interesting all round.

I guess that many had heard of Robin Williams death, but had not put the two together as its a rare form of Dementia.

Many knew about Parkinson's,  but never knew that Lewy Body Dementia was similar

I also had some heart warming emails from students who had experienced dementia in their families, but never really understood what was happening to the person they loved so much.

One or two saying that they wished  they had known more about the illness when they had the chance, but never knew what questions to ask, or how to approach them, let alone how they could help

One or two took the Lewy Body Society Cards away, so that they could learn more about the illness, by going onto the website

Many looked shocked when I spoke about the graphic nightmares, and how to approach the person without being injured

Because like it or not, as my wife said on many occasions, if I lashed out in hospital as I have at home, I could end up being  charged with GBH or worse.

But this all proved that we need to promote Lewy Body Dementia, so that more people  understand what it is etc,

I confess that I knew very little about dementia and nothing at all about Lewy Body Dementia when I was originally diagnosed in Durham, but the consultant did her best to explain it all to us.

I understood that she had herself been trained at Newcastle University under Prof Ian McKeith a lead in this form of Dementia.

Let us hope that more people start to learn more about this illness in the future.