Top ten apps for older people and those with dementia 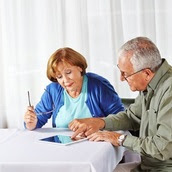 With over 1.3 million apps available for download and many with free options, unique and fulfilling experiences can be created for older people and people with dementia that can be linked to their own preferences hobbies and passions through the use of iPads, tablets and smart phones. homecare.co.uk has been exploring the top apps for older people or those with dementia who have access to touch screen technology and want to maximise the usefulness of the internet.    Dementia 1. Lumiosity – Brain Teaser There are a range of puzzles and brain teasers for people in the app which helps the people behind luminosity to create a bespoke package of puzzles to stimulate and engage users. It adapts to a person’s age and shows people how they compare with others in similar age brackets. The games involve swiping the screen in different directions and responding to commands on screen that might be more appropriate for someone in the early stages of dementia.     2. Alzheimer's Dementia Day Clock This app will inform a person with dementia that it is early morning, afternoon or night. By simplifying the time options, this app has been found to decrease common anxieties and confusion people with dementia have about what time it is if they have lost track of the cycle of time. Games 3. Magic Kaleido Magic Kaleido is an easy way to be creative and engage a person with art on their tablet. The app allows users to draw patterns in a range of colours, shapes and styles and share with family and friends. The app could be used as a form of art therapy as it provides mental stimulation controlled by the user.    4. Solve Crosswords 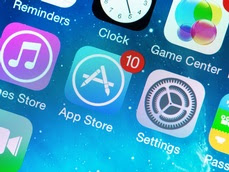 Crosswords might be popular activities for someone in the early ages of dementia and this app allows someone to continue their hobby and receive hints at a difficulty level they can select. 5. Touch Pets Dogs For animal lovers there are lots of apps where a person can stroke, interact and feed their on screen pet which makes sounds and reacts to the person’s attention. The app recreates the bond between a pet and their owner. Although not the same as a real animal, people who used to own a pet might enjoy using this app which gives them responsibility and companionship. Health 6. GPS Tracker Pro The app allows people to track and see where friends and family members are. As well as seeing if someone is running late, the GPS Tracker could be used as a safety device for older people to provide information about where someone might be if they become confused and lost or in need of support.    7. Medisafe Med and Pill Reminder The app understands the barriers facing people taking medication and is able to adapt its work to help people remain as safe as possible. Researchers behind the app found a combination of individual and condition specific factors were causing people to miss medicate themselves, whether taking too much medication or not enough or even at the wrong time. The app understands that there are often other family members involved in the medication process and works to keep them informed and involved in improving medication adherence.    Communication 8. The Wireless – Age UK This app lets you download the dedicated radio station for older people and is filled with topical features, debates and songs that are created to engage and entertain and older audience. The radio has been set up in partnership with Age UK and is only available online or on digital radio.    9. Word Press Whether users are writers or readers, Word Press keeps people up to date with blogs on the internet. The app allows writers to take down key thoughts and feelings and people can also read about topics of interest or follow blogs about their interests.    10. Viber Viber allows people to communicate through phone and video, messages and picture messages for free. It is an alternative to skype and can be used on tablets, smart phones and desktop computers.

Age UK has just closed its annual Digital Champion of the Year competition and judging will soon take place to find out who will be named the 2014 champions. The contest seeks out the most inspiring older people to have embraced technology and used it to improve their lives and others. Stephen Fry was one of last year’s judges and is a self-confessed technophile, who was one of the first celebrities to start using social media site Twitter when it was created nearly a decade ago. He said: “Like millions of others, I simply can’t imagine a life without the convenience and wonder of the internet. Yet over 5 million older people have never been online. I was delighted to help choose Age UK’s Internet Champions for 2013 and wish them all the best in inspiring more people to the ways of the web.”    Older people keen to get online Despite the number of people who have never used the internet is estimated at around five million, a research study found that the majority of older people who have engaged with the internet showed an openness to learning and a curiosity about the internet that led them to learn about technology that had captivated their family. The majority of people who had already explored the internet had done so because of younger family members and it was family who were keen to provide support for older people as they learned about different uses of technology. Ofcom published a report last year which revealed a sharp increase in people over the age of 65 using the internet, with the amount of older people accessing the internet increasing from 33 per cent in 2012 to over 42 per cent in a year. This number is expected to continue increasing and research carried out by Anchor revealed tablets were found to be the most desired Christmas present requested by older people in 2013.    Anchor's chief executive Jane Ashcroft said: “Older people are still keen to keep up to date with technology and previous Anchor research has shown that buying older relatives mobile phones or setting them up on social media or Skype can help them to keep in touch.    “It can be hard to buy for people who are older than you, but these results show that your grandparents’ wish-lists might not be all that different from your own.”    The number of people who do not have the internet and have no intention of getting the internet has also decreased and an estimated 11 per cent of the UK population do not have internet. Compared to 2012, when 15 per cent on the population did not have any intentions of getting the internet, the figure is expected to continue decreasing.