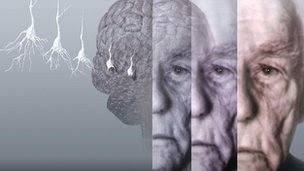 
A school in Devon is teaching its pupils about dementia as part of a plan to raise awareness of the condition.

Stoke Damerel Community College in Plymouth is one of only 20 in the UK to become a "dementia-friendly" school.

The condition affects about 700,000 in England and with people living longer, the number could double in 30 years.

"So if we can educate our students to know the signs, the symptoms and things associated with it, it can spread into the wider community.

She said people's quality of life could be extended "by about 15 years" if dementia is diagnosed in its early stages.

"If students are going home and noticing these signs in perhaps a grandparent or somebody they know, they can then maybe encourage them to go along for an early diagnosis," Ms Helmore added.

Lessons about dementia will be incorporated into various subjects at the school, including healthcare, maths, English, music and drama.

In maths, students will try to design "memory joggers" and put them into a maths equation, while in English, life stories will be made from interviews with people with the condition.

Martin Cox, Stoke Damerel's community and partnerships director, said staff at the school were fully behind the initiative.

"Some staff might have parents or partners who've been touched by dementia or Alzheimer's and seen the effects of these first hand and that's why they're very keen to bring it into the classroom and share their knowledge with the students," he said.