- November 29, 2018
I had stopped writing this blog because of difficulties putting words down on paper. But after finding a new software, and way of doing things,  I decided to write a tribute to a dear old friend and Mentor,  Trevor Jarvis, who died suddenly after a short illness.
Although I am getting the words down, I cannot find a way to get photographs on the same page. 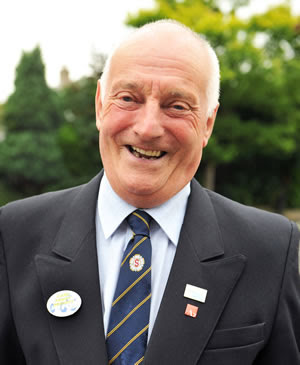 A few weeks ago, Janice and I we went to a service to remember a dear old friend of mine, Trevor Jarvis

Trevor was very well known in the Dementia community, for all of his hard work in raising awareness, as an Ambassador with the Alzheimer's Society,   among so many other things, however,  Trevor was always accompanied where ever he went, by his lovely wife and friend Ann, who I am sure had so much to put up with.
I say this because Trevor as always trying to see the funny side of any situation, and had the ability to make people laugh, but he could also be very serious when he had to be.

Trevor was loved and admired by so many people, and I never ever heard him say anything nasty about anyone, simply because I don't think he could coukd or would do it.

He had the ability to see the good in every one, and that us very rare these days

I first met Trevor back in around 2005, when I was given the  chance to go to the First UK Convention of People with Dementia  which was staged in Newcastle upon Tyne.

At first I said that I did not wish to go, as I had,  had a bad experience with one doctor, and expected the whole event to be run by doctors etc. it never occoured to me that people with dementia would or could do it.

That day I met others living with one form of Dementia or another, including Peter Ashley and James McKillop, who were high profile speakers at the time.

By lunchtime I was hooked and wanted to know more about these people, and there groups
It was after this that I too became an Ambassador with the Alzheimer's Society, and joined the Alzheimer's Societies Living With Dementia Working Group, along with around 8 other people from around England.

It was after this that I too became an Ambassador with the Alzheimer's Society, and joined the Alzheimer's Societies Living With Dementia Working Group, along with around 8 other people from around England.
As members of this  group we travelled all around the UK and sometimes abroad, if we were lucky enough to be selected

Although I had given up writing this blog, I am trying  another method of getting my words down, and although I cannot work out how to transfer photographs using this method, I am doing this for a dear friend