- February 03, 2017
Animals can have a relaxing effect on people, and its now well known that they can help people who are ill including those with a neurological illness

Over the years the animals we had at home, have had an effect on us one way or another, but they are not simply animals, they are actually a major part of our family

Not just that, but they don't ask for anything, just friendship and food, and in return they help us by providing undiluted love and friendship in return.

How many of us have returned home to be greeted by a cat or a dog, running round wildly because we have come back
Our two dogs had an uncanning knack of knowing when you were walking up the street towards the house,  and would sit just inside the front or back door waiting patiently

That's undying friendship and one which cannot be replaced.

Over the years we have had a cat, two dogs, a Budgie  and a tropical fish aquarium, but I think we got the most pleasure from either a dog or a cat.

What is more, these four legged friends seem to sense when you are struggling, and come to support you in what ever way they can, either by sitting at your feet, or forcing you to cuddle them.

I had noticed many years ago that by simply stroking an animal, your stress flows out if your body.

I have heard many people say that an animal has kept them going when they were feeling a bit down, or slightly depressed


When we got married we understood that we could not have children, so after a few years, we decided to go out and look for a dog.

Its was then that we got Major, a Lab Cross, who took over the house, and was bundle of fun

He somehow got a liking for Baileys cream, but I guess that was because it smelt quite nice

I left the room one night and found that he had climbed onto my chair and somehow managed to reach my glass, which had been put out of his way, on a shelf

I came back to find him cleaning the glass on the floor. Needless to say that the glass was still in one piece, but was spotlessly clean. After that we had to watch him like a hawk.

He was a lovely dog, and was a constant friend when you were tired, or feeling off colour

Around two years later Claire was Born, and we were unsure as to how Major would react, to someone else getting the attention

However when Claire came out of Hospital, he curled up and went to sleep beside her carry cot and stayed there.

He then  refused point blank to let either my mother in law or her sister,  get anywhere near to Claire's carry cot, let alone pick her up.,

Each time someone new went near to her he growled, as it to say she belongs to me, back off.

No matter what Claire did to this dog as she grew up,  he protected her and kept an eye on others in the room

Then Mark came along and he too was guarded by Major, and when no one was looking he would quite happily jump up on to one of their beds and sleep in the sun

Here again Mark could do no wrong in Majors eyes

A few years later when Major was getting old and tired, we had hired a caravan near to Hereford, and the children went horse riding etc.

They also had a boating lake, which was quite good, because I loved fishing as did Mark.

So one day we hired a boat and went fishing leaving Major with my wife Janice and Claire.

However Major had other ideas, because when we were out in the middle of the lake we heard a shout, and then saw Major swimming out towards us.

Needless to saw we did not catch anything, apart from what Mark called a Dogfish?
I had no idea how he managed to swim that far, and we were worried that he would not reach us, but he was determined to be with us. Needless to say we returned soaked though, as he kept shaking the water off himself and onto us.

Then one day the family were at a friends house were they saw one of their cats giving birth to a litter of kittens, one of which was Pepe who was identical to the cat below apart from the fact that she had a black dot on the right nostril

This tiny little kitten was not frightened of Major, and she would often walk under his legs while he was eating his supper, and would often help her self to his food knowing full well that he would not dare to move to stop her. 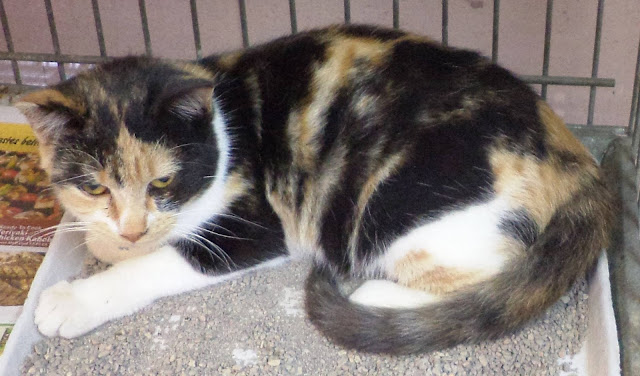 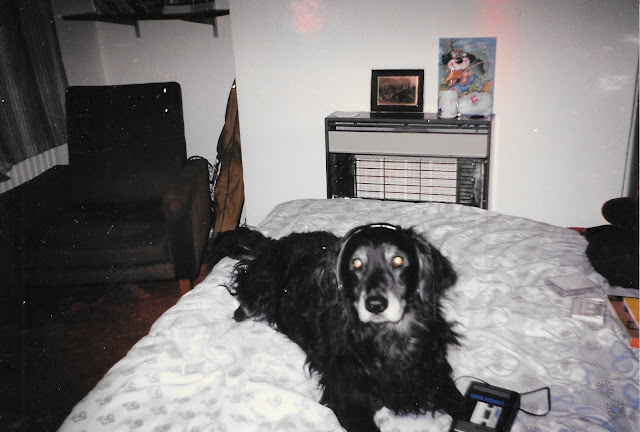 Major would often guard the family and the flat,  if I was called out at work at night, or during the night, and would stop anyone getting close to the rest of the family.

He would often be curled up just inside the front door, when I came back at odd hours during the night, after a callout

If I went for a nap after a long night, he too would join me and would lie curled up behind my knees

I would often wake up with Major behind me, while Pepe would be curled up in front of me
Nothing seemed to frighten him at all, but he was a true watch dog, even though he was not a big dog

After he passed away, we said we would never get another dog, but in the end we got another Lab Cross and he was called Ben

Ben was very nervous when we got him, but I guess the children and Pepe helped him to settle down, and he became a real friend to all in the house 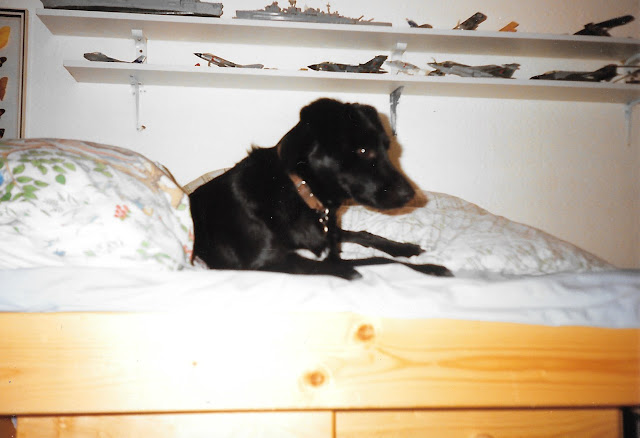 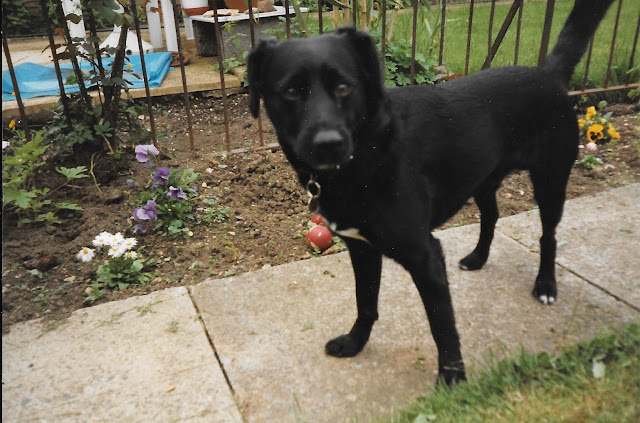 Ben watching our neighbour's in the garden

Although he was a nervous dog, he was a bundle of fun, and would often run down the back garden until the neighbour's security light came on, the he would run back into the house.

This was a nightly event which I am sure annoyed the neighbours, but there was nothing we could do about it, because he could get out through our cat door.

One summers night, Ben followed Pepe out of Claire's open bedroom window, until he lost his grip.
We were all sat outside in the garden that night and saw what was happening in slow motion.

Ben slid down a PVC lean too roof landing on the Dust bin, then ran down the garden wagging his tail.

We were all grateful that the dustbin had broken his fall, but we were all killing ourselves laughing as he ran off, partly shocked, and partly well aware just how silly he had been to follow the cat out of the window

Needless to say, he never did that again

Pepe sadly passed away shortly after this, and we all missed her including Ben

If I was ever called out late at night, I would often find him sitting in the back garden waiting for me to return with my push bike, then he would disappear upstairs to bed.

If it was wet or cold, he would be sat with his head out of the cat door waiting

When I was ill and waiting for the diagnosis, he was a constant companion, and at times would drive my nuts, because I could not even go to the toilet without him following, and waiting outside the door for me to return

I had problems with hallucinations at the time, but I realised that if he did not move, then that's all it was, and in some way it helped me to cope

Bens only problems was that he disliked loud noise and would shake terribly if a firework went off,

Needless to say on fireworks night or New Years eve when fireworks went off, I would spend a lot of time trying to support him

Eventually we moved back to the North East, where I was diagnosed  with early onset Lewy Body Dementia, and from then on his health went down hill.

He then passed away and that was hard to accept, but the vet said that perhaps he had been ill for sometime, but had hidden it until my diagnosis had been sorted out, and then decided to let go

It seems that animals can sense things like this, and have an uncanny knack of keeping us going at their expense. I think this hit me harder after the vet had said those words.

However I will always remember these three friend's, who came into our lives and brightened things up at times