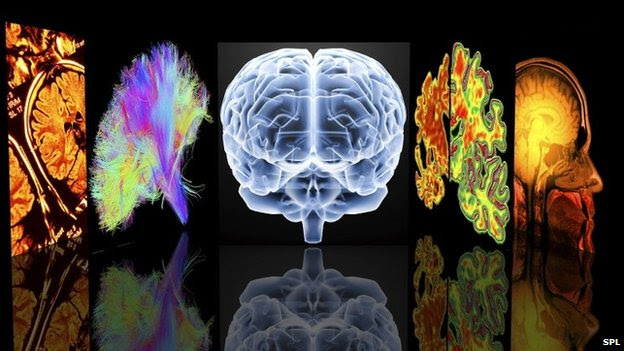 The brain has a weak spot for Alzheimer's disease and schizophrenia, according to UK scientists who have pinpointed the region using scans.

The brain area involved develops late in adolescence and degenerates early during ageing.

At the moment, it is difficult for doctors to predict which people might develop either condition.

The findings, in the journal PNAS, hint at a potential way to diagnose those at risk earlier, experts say.

Although they caution that "much more research is needed into how to bring these exciting discoveries into the clinic".

The Medical Research Council team who carried out the study did MRI brain scans on 484 healthy volunteers aged between eight and 85 years.

The researchers, led by Dr Gwenaëlle Douaud of Oxford University, looked at how the brain naturally changes as people age.

The images revealed a common pattern - the parts of the brain that were the last to develop were also the first to show signs of age-related decline.

These brain regions - a network of nerve cells or grey matter - co-ordinate "high order" information coming from the different senses, such as sight and sound.

The findings fit with what other experts have suspected - that although distinct, Alzheimer's and schizophrenia are linked.

Prof Hugh Perry of the MRC said: "Early doctors called schizophrenia 'premature dementia' but until now we had no clear evidence that the same parts of the brain might be associated with two such different diseases. This large-scale and detailed study provides an important, and previously missing, link between development, ageing and disease processes in the brain.

"It raises important issues about possible genetic and environmental factors that may occur in early life and then have lifelong consequences. The more we can find out about these very difficult disorders, the closer we will come to helping sufferers and their families."

Dr Michael Bloomfield of University College London said: "Schizophrenia can be potentially devastating but at the moment it's very difficult to predict with certainty who is going to have a good prognosis and who might have a poor one.

"This study brings us a step closer to being able to make this prediction, so patients could in the future receive better targeted treatments."

Armed with this new knowledge, it may also be possible to understand how to prevent the brain changes before they occur, he said