Woman astonishes doctors across the world after surviving for 20 YEARS with dementia ... while writing two books, delivering lectures and even finding new love

Almost 20 years after being diagnosed with Alzheimer's, Christine Bryden has defied all odds and stumped medical professionals by defying the disease and living a normal successful life.
After being diagnosed with early onset dementia at the age of 46 in 1995, the mother-of-three was devastated by her terminal prognosis. She was told she would need full-time care within five years and would be dead before she turned 60.
And yet two decades later, Ms Bryden has reshaped medical thinking about the disease, writing two books, completing a post-graduate diploma and even entering into a new relationship with her partner - all while her brain continues to deteriorate. 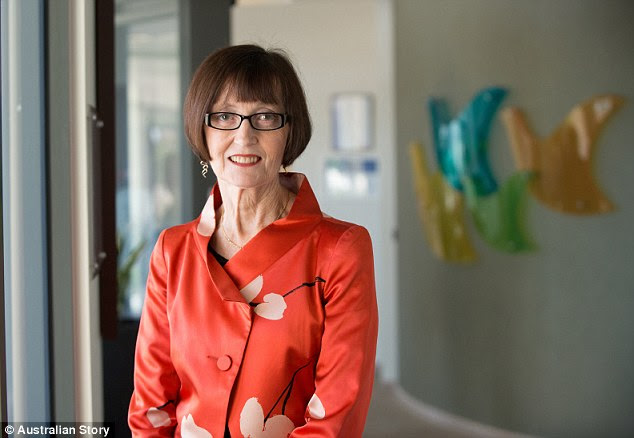 +7
Christine Bryden was diagnosed with Alzheimer's at only 46 years of age. She has since then astounded medical professionals and beat all the predictions regarding her health
In 1995, she visited a doctor for brain scans after experiencing a great deal of stress and extreme migraines.

The then Australian government scientist was told by two separate doctors to leave her career behind as her scans showed that damage to her brain was well underway and would continue at a creeping rate, as is common with dementia.

Source: Alzheimer's Australia
They gave her the bleak diagnosis that she would be completely incapacitated and be required to move into a nursing home within five years - and then die three years later.
'It was mind blogging. I was totally horrified, I couldn't believe it could happen to anybody so young,' Ms Bryden told the Daily Mail Australia.
'And then I just felt total horror as to what would face my girls and me in the future - my youngest was only nine and still in primary school.
'What was terrifying was the way I would; die without knowing anything - and that's a really terrible fear to have.
'Somehow its difficult to be brave when you face losing the ability to be brave. But slowly im trying to adapt and its hard work trying to keep going, keep talking and keep thinking.'
Despite her emotional turmoil, Ms Bryden refused to simply let the disease take over her mind.
She released a book, 'Who Will I Be When I Die', which explores the isolation and the feeling of identity loss experienced by dementia sufferers.
Three years after her diagnosis, she even fell in love and married Paul Bryden, who continues to support and encourage her to this day.
It was on their first date that Ms Bryden said she told Paul of her diagnosis, but since then 'he hasn't looked back, so we're on this journey together,' she said.
'I call him my enabler, he enables me to keep functioning, rather than a carer which implies doing things for me.' 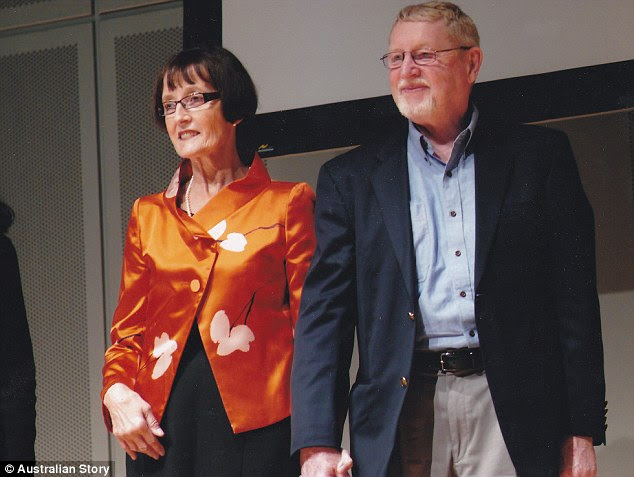 +7
Three years after her diagnosis, she fell in love and married Paul Bryden (right), who continues to support and encourage her to this day 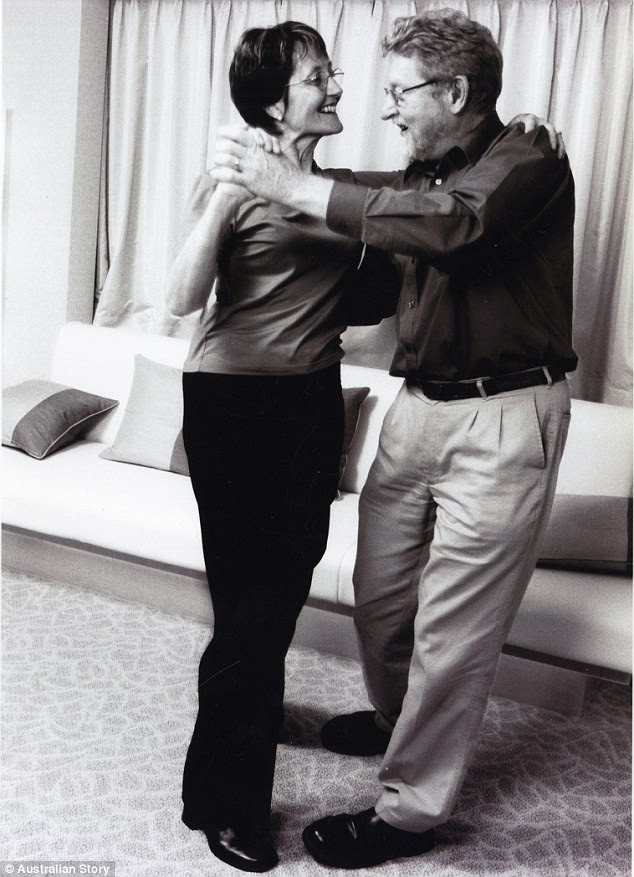 +7
She has also released two books, including Who Will I Be When I Die, which explores the isolation and the feeling of identity loss experienced by dementia sufferers
Ms Bryden has astonished medical professionals across the world, defying even the most positive odds, and has become an active advocate for people suffering from dementia by speaking about her personal experience within the wider social issue.
'There was no support back then. When I rang up association they asked me "who are you looking after?" and when I said it was me they said "we don't have support for you, only for the carer",' Ms Bryden said.
'I had a nine-year-old girl - how do you explain what you have and what's going to happen?
'She went to show and tell the next day and said "my mum has a hole in her head" because that's what it looks like in the brain scan.
'All of that has changed now! I was so upset and passionate to change [the lack of support] at the time.'
Despite noting that positive changes since her own diagnosis, Ms Bryden believes there is still more to be done in order to help dementia sufferers lead a normal life in society.
'I'm really passionate about trying to make it better for other people being diagnosed today,' she said.
'I want people to feel brave and I want society to accept us as disabled people amongst us who deserve dignity and respect, not to be shunned and laughed at.
'There are so many jokes out there about old timers disease and "I'm losing my marbles". It's so hurtful. people don't realise that it's like saying "I've got a touch of cancer today". It's a terminal illness that people joke about.' 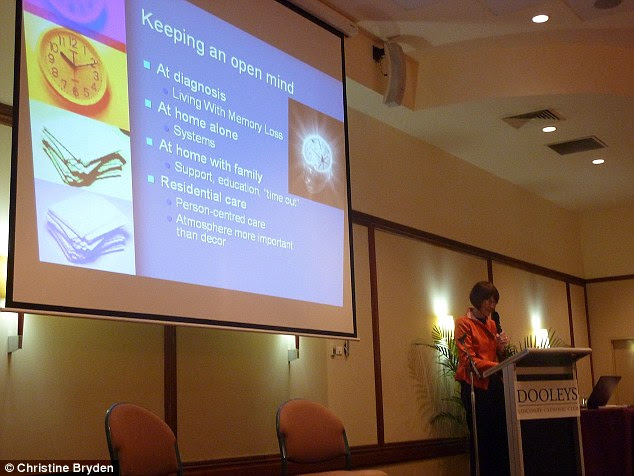 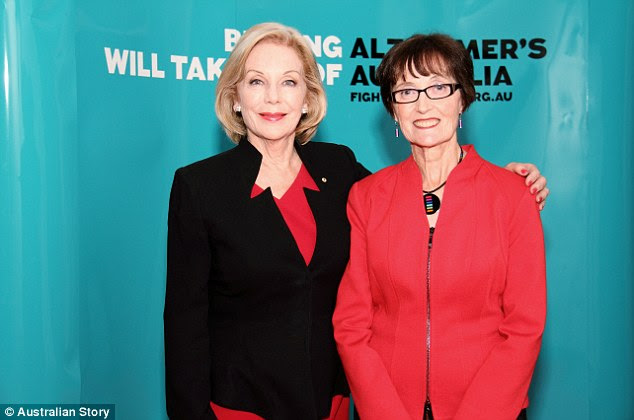 +7
Christine was appointed Queensland Alzheimers Australia ambassador by Ita Buttrose (left). She was also the first person with dementia to address the international conference of Alzheimer's Disease International
The dementia advocate attributes survival to the immense support she receives from her family, as well as her consistent effort to stimulate her brain and use it in new ways.
However, despite Ms Bryden's remarkable journey, the effects of the disease continue to creep in and make their impact.
'I have no idea why I've lasted this long except that I've been trying very hard. But it doesn't matter how hard some people try, it might not necessarily help them because their brain is disappearing too fast.
'My brain is disappearing slowly and therefore giving me a chance to keep going.
'As my brains disappears - and it's definitely disappearing, bit and bits disappear everyday - I have to use different parts and I have to keep trying. I'm rewiring my brain all the time.
'I was functioning at high level to begin with – I am a very determined individual and I do get very exhausted. It would be very easy to just have a quieter life, but I think by putting all this effort in, it's been worth it. Not everyone is as lucky.' 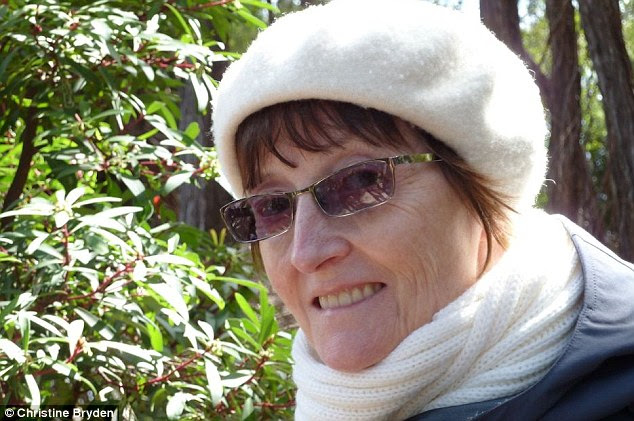 +7
Famous in Japan: Ms Bryden's second book, Dancing With Dementia, was written in response to requests for updates on her life and was commissioned by a Japanese publisher 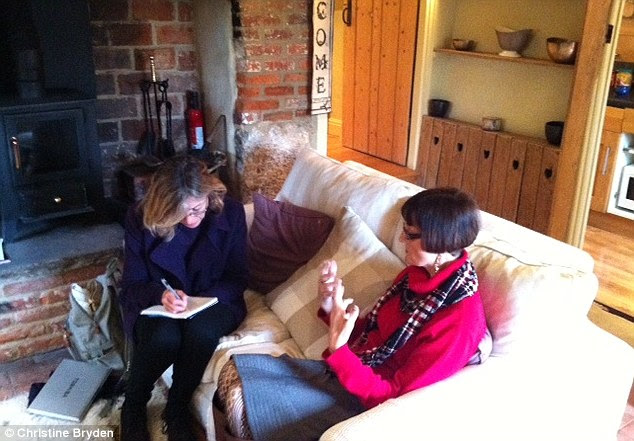 +7
She has done many interviews and documentarys in the last 20 years, and has given talks all over the world including in UK, France, Israel, South Africa, Brazil, Dominican Republic, Taiwan, South Korea and Turkey
Ms Bryden wants to continue inspiring hope within people who are suffering because of the disease, whether patient or carer.
Dementia affects over 44 million people worldwide and more than 300,000 people across Australia, with numbers only set to grow as the population ages, according to Alzheimer's Australia. There is still much to be learned about the disease which presents itself in a range of symptoms that affect a person's thinking, behaviour and the ability to perform everyday tasks.
'I just want people to have hope for a future living a new life with dementia – and not to give up and fall into despair,' she said.
'I hope that as a result of all this effort, that people with dementia and their family are encouraged and can overcome that terrible fear and the stigma.'
See her full story on Australian Story at 8pm tonight on ABC1.
If you have any queries or require any help in relation to dementia, please call the Alzheimer's Australia help line on 1800 100 500.
Read more: