This sounds interesting. I had heard about this a few years ago, and now its back in the news.


Researchers at the University of Sunderland may have found a simple key to solve the problem of dementia and memory loss and even reverse these effects of aging.   They have shown that regular exposure to low-level infra-red light can improve learning performance and trigger regeneration of the cognitive function of the brain.

The results are a scientific breakthrough as current pharmaceutical treatments for diseases such as dementia and Alzheimer's can only slow down brain deterioration.

The researchers claim that early stage dementia patients should see an improvement in their cognitive function within four weeks, by wearing a specially designed lightweight helmet for just ten minutes a day.


Human testing of the infra-red treatment on the brain is due to start this summer.

The new infra-red device was created by Dr Gordon Dougal, a director of Virulite — a medical research company based in Newton Aycliffe, County Durham — which is also behind the innovative device for curing cold-sores. 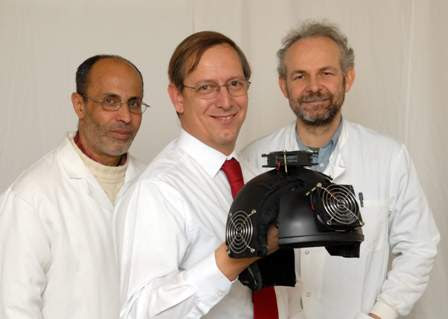 Lead researcher at the University of Sunderland Dr Abdel Ennaceur and Durham University’s Dr Paul Chazot are pictured with Dr Gordon Dougal and a prototype cognitive helmet
He came up with the idea of using a safe level of infra red light on the human brain after it had proved effective in the treatment of cold sores — a process that relies on boosting the cells within the body responsible for killing the virus, rather than attacking it.

The infra-red light used has a wavelength of 1072nm, which occurs naturally in sunlight and, at the intensity levels used, is considered completely safe. Dr Dougal said: “The implications of this research at the University of Sunderland are enormous, so much so that in the future, we could be able to affect and change the rate at which our bodies age.

“As we get older, cells stop repairing themselves and we age because our cells lose the desire to regenerate and repair themselves. This ultimately results in cell death and decline of the organ functions, for the brain resulting in memory decay and deterioration in general intellectual performance.

“But what if there was a technology that told the cells to repair themselves and that technology was something as simple as a specific wavelength of light? Near infrared light penetrates human tissues relatively well, even penetrating the human skull, just as sunlight passes through frosted glass.”

Dr Dougal, who claims that ten minutes of exposure to the infrared light daily would have the desired effect on the brain, added: “Currently all you can do with dementia is to slow down the rate of decay. This new process will not only stop that rate of decay but partially reverse it.”

Fellow neuroscientist Paul Chazot, who helped carry out the research, added: “The treatment can indeed improve learning ability. The results are completely new — this has never been looked at before.

“Dr Dougal’s treatment might have some potential in improving learning in a human situation by delivering infra red through the thinnest parts of the skull to get maximum access to the brain.”

Further research work will continue in this area, funded by Cels, who support healthcare research and development in universities, hospitals and companies within the North East of England.