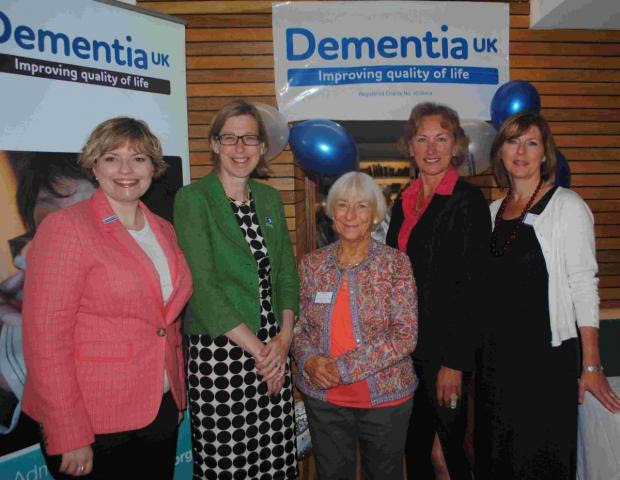 Mystery benefactor and hard work leads to first year success for dementia charity fundraisers
The determination of a group of local fundraisers and the generosity of a mystery benefactor has seen £60,000 raised for Dementia UK in just a year and has led to the recruitment of two specialist nurses who will support those suffering from the condition and their carers.

Dementia UK Cornwall celebrated its first anniversary this week and shared the news that the two new Admiral Nurses should be in post in Cornwall by the end of the summer.

The Cornish support group was set up by Shirley Barnicoat and her daughter Lisa Dann following the death of her husband, Paul, in January of last year. “He had been suffering from dementia for several years and we thought we would try and get an Admiral Nurse in Cornwall,” said Shirley.

We asked how it could be done and were told we’d have to raise £60,000. We were all determined, and with some really good helpers we have raised £30,000 in the first year.”

Lisa, who is chair of Dementia UK Cornwall, added: “The folk of Cornwall have been very generous, not just of heart, but of pocket as well. We also have a private benefactor who said that when we reached £30,000 they would match fund us, so we can now say we have raised over £60,000.”
At Monday’s anniversary gathering at the St Michael’s Hotel, the total raised for the year stood at £29,400 until HSBC stepped forward with a cheque for £1,069 which had been raised by staff and customers at branches across Cornwall.

Admiral Nurses are mental health nurses who specialise in dementia and have skills and knowledge to support family carers. Two will be recruited in an innovative partnership with Cornwall Care, but will be available to everyone.

“You do not have to be a Cornwall Care client to access an Admiral Nurse,” said Joanna Westley, head of fundraising and communications at Dementia UK. “There will be a telephone number that anyone can call.”

Joanna was full of praise for the Cornish group. “Dementia UK is delighted with the success of the fundraising efforts in Cornwall,” she said. “The generosity of the Cornish supporters has been truly heart-warming.

“To have raised £60,000 in one year is absolutely amazing and unique in Dementia UK’s history. It is the result of a year of tremendous hard work and singular determination.”

Compliments also came from MP Sarah Newton who said: “It is with great pride that I have been able to represent the work you do.

“You have done an extraordinarily good job in raising what is a remarkable sum of money.”