DEMENTIA patients are set to receive improved care following the appointment of Scotland’s first “Admiral Nurses”.
The specialist dementia nurses, developed by the charity Dementia UK, ensure the needs of people with dementia are addressed in a co-ordinated way.
This helps avoid unnecessary hospital admissions and reduces the time needed with GPs and other professionals. 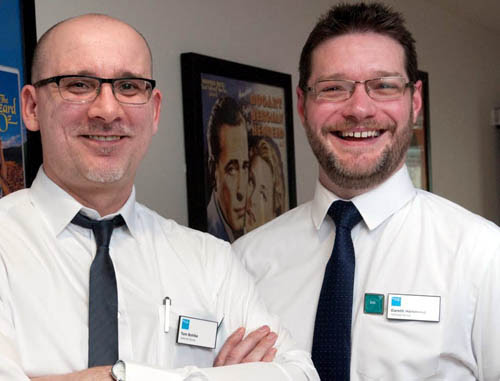 Gareth (right) and Tom are looking forward to taking up their posts.

The nurses, Tom Bohlke and Gareth Hammond, have been appointed as Bupa Admiral Nurses.
They will split their time between supporting dementia patients who live in Bupa care homes, and those living in the community regardless of whether they are Bupa customers.
Tom and Gareth will work across the central belt of Scotland including Glasgow, Edinburgh and the west of Scotland.
Tom said he was “thrilled” with the new role. Gareth said: “I can provide advice on how to reduce stress and focus on ensuring activity for their well-being.”
Earlier this year, Bupa announced a plan to recruit 150 “Dementia Ambassadors” – the largest number in Scotland – ensuring at least three will be located in each of its care homes across the country.