This is a subject I am interested in as I am due to have surgery on my knee and perhaps my hip next year. I confess that I am a little worried about this, but I am hoping that my doctor can steer me through the process

Study of 9,000 patients suggests general anaesthetics may affect brains as a result of postoperative cognitive dysfunction 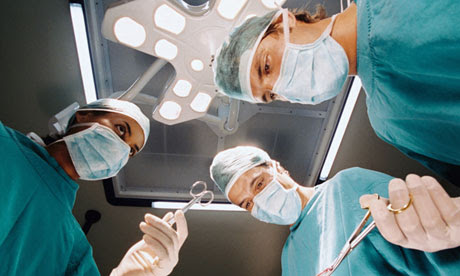 The researchers, led by Dr François Sztark of the University of Bordeaux, say it is still uncertain whether POCD can be a precursor to dementia. Photograph: Richard G/Stock Image
Older people who have a general anaesthetic while undergoing surgery are 35% more likely to develop dementia years afterwards as a result, according to new research.
The study has reopened the question of whether anaesthetic agents may potentially affect the brains of children or elderly patients, as some evidence suggests.
Research from France being presented on Sunday at a conference of anaesthetists identifies postoperative cognitive dysfunction (POCD), a common delirium-like complication of major surgery in older people, as a likely cause of dementia that develops some years later. Some scientists believe POCD may be associated with dementia because of a common pathological mechanism involving the amyloid beta peptide.
Amyloid plaques are found in the brains of those suffering from Alzheimer's, by far the most common form of dementia, as well as dementia with Lewy bodies and Parkinson's disease dementia. Previous studies have suggested that certain anaesthetics may promote the inflammation of neural tissues and so lead to either POCD or Alzheimer's disease precursors, including amyloid plaques and neurofibriliary tangles. But the authors, led by Dr François Sztark of the University of Bordeaux, say it is still uncertain whether POCD can be a precursor to dementia.
Their research used data from the 3C study, which began examining the health of 9,294 people aged 65 or over in the French cities of Bordeaux, Dijon and Montpellier from 1999 in order to assess the risk of dementia and decline in cognitive function linked to vascular risk factors. Participants were checked two, four, seven and 10 years later. Each time the 7,008 patients without dementia were asked if they had had either a general or local anaesthetic since the last check-up. After two years, 2,309 (33%) had undergone one in that time, of which 1,333 (19%) were general and 948 (14%) local. In total 632 participants developed dementia over eight years.
Sztark's team found that, at the two-year follow-up, 37% of those with dementia had been exposed to anaesthesia, compared with 32% of those who had not experienced neurodegeneration. While 22% of the patients with dementia had had a general anaesthetic, 19% of those free of dementia had done so.
A summary of their findings, which are being unveiled at the annual meeting of the European Society of Anaesthesiology, states: "After adjustment, participants with at least one general anaesthesia over the follow-up had a 35% increased risk of developing a dementia compared with participants without anaesthesia." That risk is for general anaesthesia, not all anaesthesia, they stressed.
Sztark said the authors had a "95% confidence interval" in that level of heightened risk of a condition which 800,000 Britons already have, a number which is expected to rise to over one million by 2021 due to the ageing population. The true risk is between 11% and 63%, he added.
"These results are in favour of an increased risk for dementia several years after general anaesthesia." Health professionals should, he said, be aware of the possibility of POCD when deciding how to manage elderly patients who are being fully anaesthetised.
Dementia organisations responded cautiously. Dr Eric Karran, director of research at Alzheimer's Research UK, said: "This is early data and given the complexity of the findings we need to await the full peer-reviewed publication before fully interpreting the results. Research into the impact of anaesthetics on dementia is challenging because it can be very difficult to tease out cause and effect. Dementia is caused by several brain diseases, many of which arise from a complex mix of genetic and environmental factors."
Dr Doug Brown, director of research at the Alzheimer's Society, said: "The early results from this study support the view that anaesthesia may increase risk of developing dementia but questions still remain about why this is the case and whether other factors could also have a role to play."