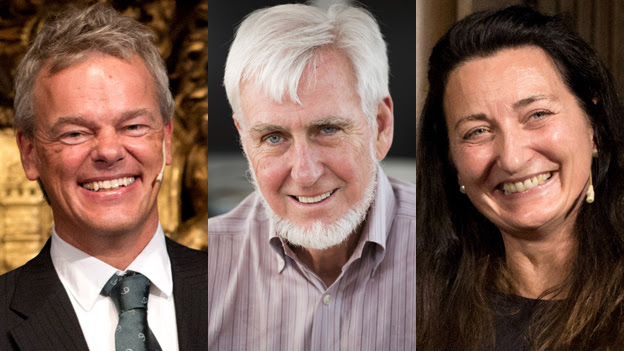 The Nobel Prize for physiology or medicine has been awarded to three scientists who discovered the brain's "GPS system".

They discovered how the brain knows where we are and is able to navigate from one place to another.

Their findings may help explain why Alzheimer's disease patients cannot recognise their surroundings.

Prof John O'Keefe: "There were thoughts of exhilaration and pleasure"

"The discoveries have solved a problem that has occupied philosophers and scientists for centuries," the Nobel Assembly said.
Inner GPS

On hearing about winning the prize, he said: "I'm totally delighted and thrilled, I'm still in a state of shock, it's the highest accolade you can get."

His work showed that a set of nerve cells became activated whenever a rat was in one location in a room.

He absolutely deserves the Nobel Prize, he created a cognitive revolution”

A different set of cells were active when the rat was in a different area.

Prof O'Keefe argued these "place cells" - located in the hippocampus - formed a map within the brain.

He will be having a "quiet celebration" this evening and says the prize money "should be used for the common good".


Mapping
In 2005, husband and wife team, May-Britt and Edvard, discovered a different part of the brain which acts more like a nautical chart.

These "grid cells" are akin to lines of longitude and latitude, helping the brain to judge distance and navigate.

They work at the Norwegian University of Science and Technology in Trondheim.

Prof May-Britt Moser said: "This is crazy, this is such a great honour for all of us and all the people who have worked with us and supported us."

The Nobel committee said the combination of grid and place cells "constitutes a comprehensive positioning system, an inner GPS, in the brain".

They added: "[This system is] affected in several brain disorders, including dementia and Alzheimer's disease.

"A better understanding of neural mechanisms underlying spatial memory is therefore important and the discoveries of place and grid cells have been a major leap forward to advance this endeavour."

He absolutely deserves the Nobel Prize, he created a cognitive revolution”

Dr Colin Lever, from the University of Durham, worked in Prof O'Keefe's laboratory for ten years and has already dreamt on two occasions that his former mentor had won the award.

He told the BBC: "He absolutely deserves the Nobel Prize, he created a cognitive revolution, his research was really forward thinking in suggesting animals create representations of the external world inside their brains."

"Place cells help us map our way around the world, but in humans at least they form part of the spatiotemporal scaffold in our brains that supports our autobiographical memory.

"The world was not ready for his original report of place cells in 1971, people didn't believe that 'place' was what best characterised these cells, so there was no great fanfare at that time.

"But his work on hippocampal spatial mapping created the background for discovering grid cells and with grid cells, the world was prepared and we all thought wow this is big news."

Previous winners of the Nobel Prize for physiology or medicine

2013 - James Rothman, Randy Schekman, and Thomas Sudhof for their discovery of how cells precisely transport material.

2011 - Bruce Beutler, Jules Hoffmann and Ralph Steinman shared the prize after revolutionising the understanding of how the body fights infection.

2010 - Robert Edwards for devising the fertility treatment IVF which led to the first "test tube baby" in July 1978.

2009 - Elizabeth Blackburn, Carol Greider and Jack Szostak for finding the telomeres at the ends of chromosomes.

Also commenting on the announcement, Prof John Stein form the University of Oxford, said: "This is great news and well deserved.

"I remember how great was the scoffing in the early 1970s when John first described 'place cells'.

"Now, like so many ideas that were at first highly controversial, people say 'Well that's obvious!'"